To track down the Nian Beast, the Celestial and Book of Fuxi visits the ancient Shenzhou village of Xanadu for traces. Spring event [Empyrean Legends] available!


2. Spring event: Empyrean Legends
◆ To track down the Nian beast, the Celestial and Book of Fuxi visit the ancient Shenzhou village of Xanadu for traces. What secrets do the intriguing characters that they encounter harbor?

◆ Darkbolt Jonin
1. Extended the duration of Darkbolt Mark to 30s.
2. Skill [Biting Ember]: Extended the duration of Total DMG Multiplier applied by [Darkbolt Pursuit] to 30s.
3. When Basic ATKs hit, the Zakti recovered by the 3rd and 4th sequences is increased to 60 and 70 respectively.
4. The Zakti recovered by [Jonin Finisher] on hit is increased to 60.
5. Skill [Raksha's Rage]: The DMG Multipliers of the 1st (Demon Fox) and 2nd (Samsara of Death) sequences are increased to 600% and 7x120%+7x180% ATK of AOE Lightning DMG respectively.
6. Skill [Naraka Finisher]: Extra SP recovered on hit is increased to 1.4.
7. Skill [Darkbolt Pursuit]: Increased the range of casted kunai.
8. Fixed the glitched texture of her default weapon.
9. Fixed an issue where her turning is too slow or stutters on the Bridge and Co-op Prep screen.
10. Fixed an issue where her weapon disappeared when changing equipment.


◆ Molotov Cherry
When [Blueberry Blitz] is in the team, the Spice accrued by the 3rd and 4th sequence of her Basic ATKs (excluding Joint) is reduced by 5% and 10% respectively.


◆ Molotov Cherry & Blueberry Blitz
Fixed an issue where tapping the weapon skill button after taking a hit made her use Basic ATKs instead of weapon skills.


◆ Vermilion Knight
1. When her battlesuit rank reaches SSS, her [ATK Growth] stat is increased to 5.
2. The DMG dealt by the 1st sequence of her QTE [Solar Impact]  is increased to 700% ATK of Fire DMG.


◆ Stygian Nymph
1. Adjusted the timing of combat HUD reappearing when using Ultimate as Veliona to switch into Saule. Buttons now reappear after energy consumption upon Ultimate usage.
2. Fixed her glitched model on the Co-op results screen.


◆ All Battlesuits
1. Adjusted the number of tags for battlesuits. Now only the primary tags which are no more than 3 for each battlesuit are displayed.
2. Optimized the sorting and filtering screen of battlesuits. Added new sorting options.
3. Added 6 tags: [Weaken], [Impair], [Aerial], [Slow], [Time] and [Pull].

======Enemies======
◆ Benares
Fixed an issue where her model clipped with other enemies.

======Activities======
◆ Open World
1. Aligned the Adventure Level in Sakura Samsara and Schicksal HQ. The initial level is the higher of the two.
2. Streamlined the process of obtaining Adventure EXP. Now Adventure EXP is rewarded upon the completion of an Adventure Task.
3. Urgent Missions are replaced by [Familiar's Requests] that are triggered by the leveling up of Open World Familiars (Higokumaru and Ai-chan). Familiar's Requests share the same numbers, contents, difficulties and rewards with Urgent Missions.
4. Adjusted how cycle finalization rewards are calculated. [Weekly Rating] and [Task Finalization] rewards have been merged into [Weekly Finalization] rewards that are issued on every Monday. [Task Rating] rewards are replaced by [Round Finalization] rewards that are issued after every task round ends.
5. Closed the task rating system in Schicksal HQ. [Round Finalization] rewards are no longer affected by task ratings.
6. Adjusted the rewards of [Round Finalization]. Gyakushinn Miko Soul and Luna Kindred Soul are now replaced by Battlesuit Soul Option that allows Captains to choose from Ritual Imayoh Soul, Sündenjäger Soul, Arctic Kriegsmesser Soul, Luna Kindred Soul or Gyakushinn Miko Soul.
7. Exorcism tasks that rewarded [Enigmanon: Parts] now reward [Blood Embrace Parts] instead.
8. Optimized how Familiars gain EXP. Familiars auto-gain EXP upon every round finalization.

======Extraction======
The v3.6 event of extracting weapons [Ranger's Cross] and [Devourer] has ended and the weapon extraction pods have expired.


◆ BP Stores
1. Added the option to purchase [Mind Stones].
2. Adjusted the contents of [ELF Gacha] and reduced its price to [Honor Chip] x50. 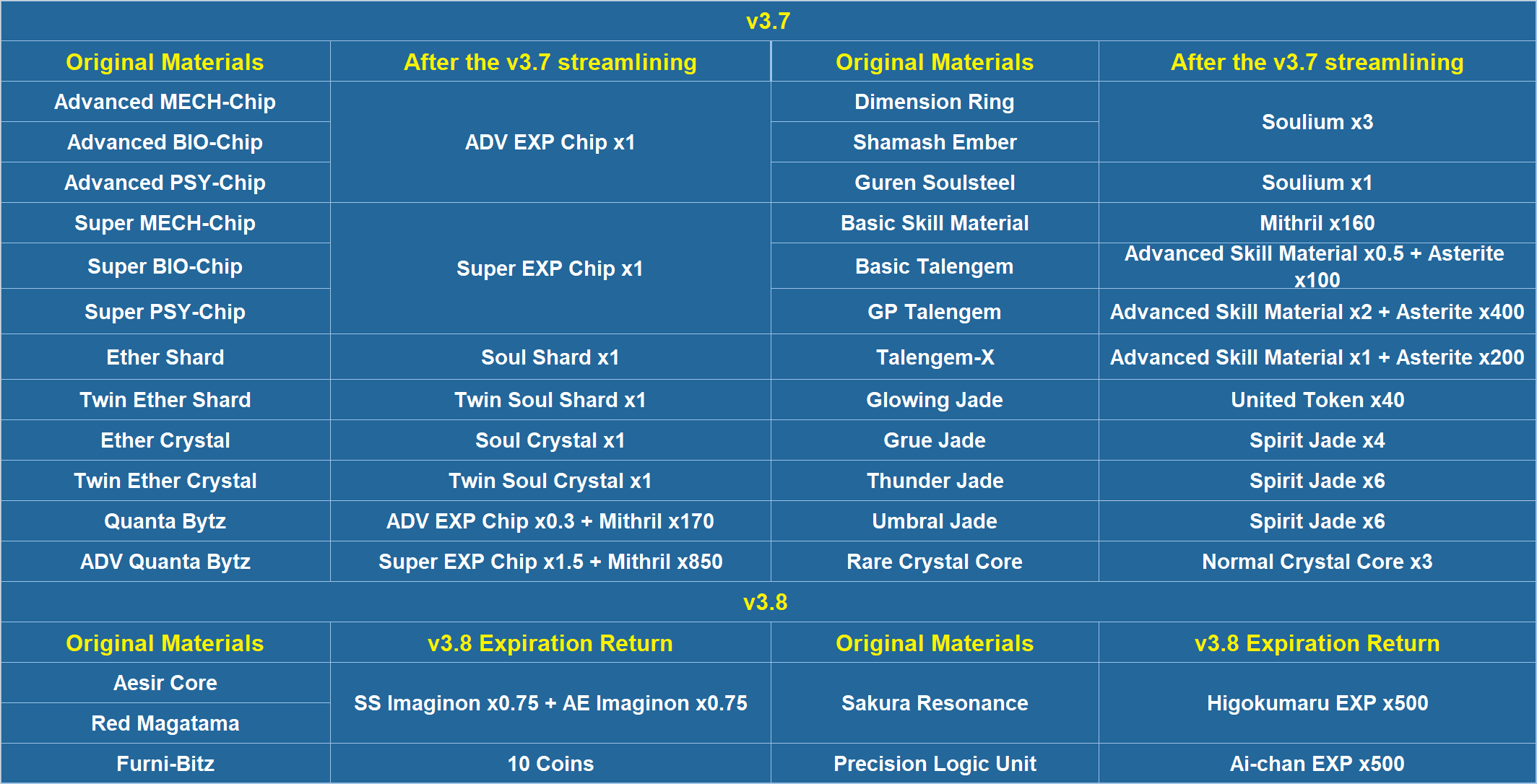 ◆ ELFs
1. The skill and talent systems of ELF have been merged into the new skill tree system. New ELF skills are boosted by spending Advanced Skill Materials, Coins and Mind Stones.
2. ELFs are no longer limited by level caps when leveling up. ELFs can now be leveled up directly to the current max level with sufficient materials.


◆ Dorm
1. Crafting Dorm furniture now consumes Honkai Blocks instead of Furni-Bitz (every Furni-Bitz returns 10 Coins).
2. Added an option of purchasing Honkai Blocks x40 with 300 Furni-Bitz in v3.7 only. 50 purchases only.

◆ Weapons dropped in BEFALL stages can now be upgraded with common upgrade materials.

======Dorm======
◆ Added the feature to refresh the Errand list. The daily refresh limit increases along with Dorm Squad Level.

◆ Optimized the visuals and layout of Dorm main screen.

◆ The battlesuits and battlesuit souls of [Herrscher of the Void], [Arctic Kriegsmesser] and [Luna Kindred] have joined [Dorm Supply].

◆ Fixed an issue where fighting as Vermilion Knight might trigger error messages.