Greetings, Captains! Welcome to the latest episode of Aichan's Armament Rundown,
where Ai-chan will be sharing tips on using the equipment recommended for [Herrscher of Flamescion]: [Key of Radiance] and [Murata Himeko (T, M, B)]!

※※※※※New Weapon Overview※※※※※
[Key of Radiance] and its PRI-ARM form [Domain of Incandescence] are the pistols released in v5.0 geared towards [Herrscher of Flamescion]. Their actives will restore SP and deal massive Fire DMG, while their passives will boost Fire DMG and the Total DMG dealt by Combo ATKs and Ultimates.

[Blazing Air]
Hurl the pistols into the air to attack enemies, automatically dealing 20% ATK of Fire DMG per 0.2s to enemies nearby (12 hits in total) and restoring 3 SP, after which the pistols explode, dealing 600% ATK of Fire DMG. Herrscher of Flamescion equip bonus: Pistol hurling restores 3 bonus SP and the explosion DMG detonates Ember Brands.

Analysis:
Can deal 840% ATK of Fire DMG in total. Multi-hits can easily wear down Hit Shields. When cast by Herrscher of Flamescion, she will regain 6 SP and detonate Ember Brands.

*The following skill data are at Lv. 65. 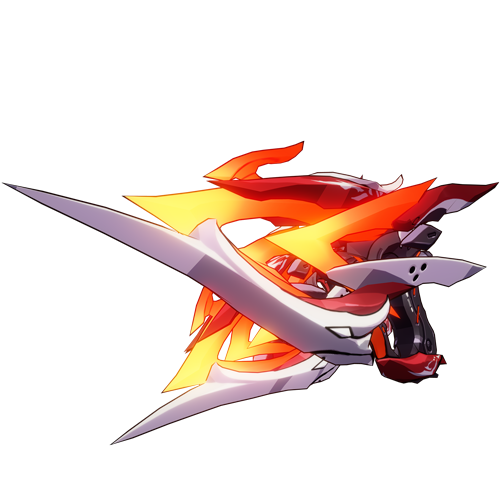 6★ [Light Up the World]
Hurl the pistols into the air to attack enemies, automatically dealing 20% ATK of Fire DMG per 0.1s to nearby enemies (24 hits in total) and restoring 4 SP, after which the pistols explode, dealing 750% ATK of Fire DMG. Herrscher of Flamescion equip bonus: Pistol hurling restores 5 bonus SP and the explosion DMG detonates Ember Brands.

Analysis:
Retains the mechanics of pre-PRI skill [Blazing Air]. The multi-hit count has doubled to 24 hits. The explosion's Fire DMG and the hurl's SP regen are also more potent. 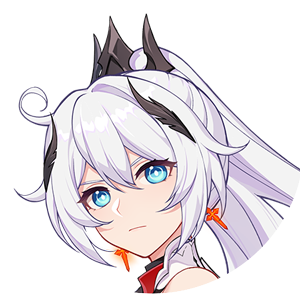 This weapon will thoroughly enhance [Herrscher of Flamescion]'s Fire DMG output, especially for her Combo ATK and Ultimate. The multi-hit aspect of its active will help her adapt to more scenarios since she normally lacks such attacks.

※※※※※New Stigmata Overview※※※※※
[Murata Himeko (T, M, B)] is built around strengthening Fire DMG output in low HP situations and in Herrscher form. It can be a game-changer when the user's health is critically low. Very effective when used by Herrscher of Flamescion.

★★Stigmata Rundown★★
*The following skill data are at Lv. 50. 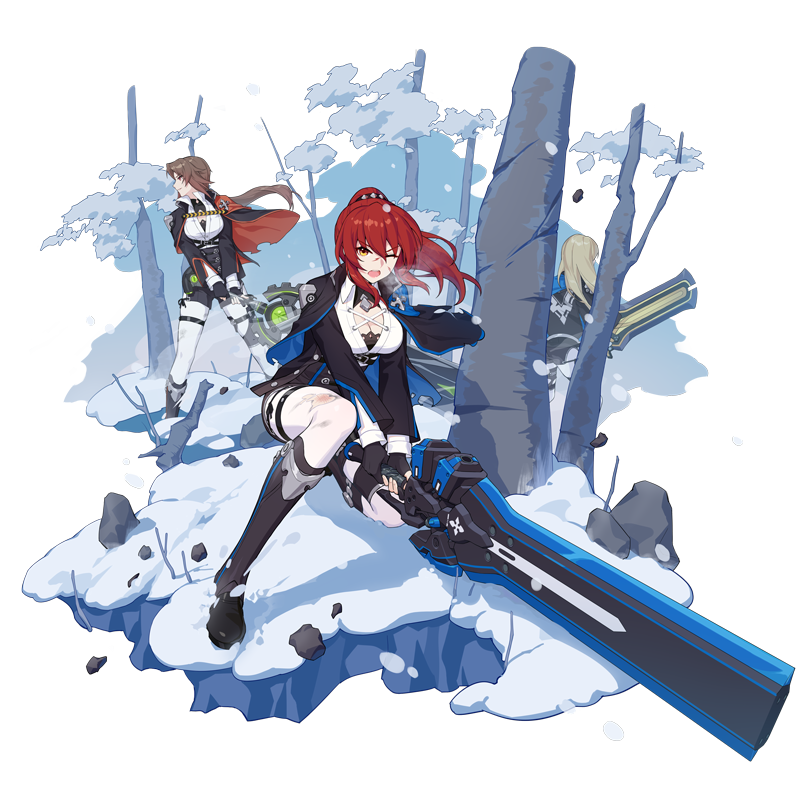 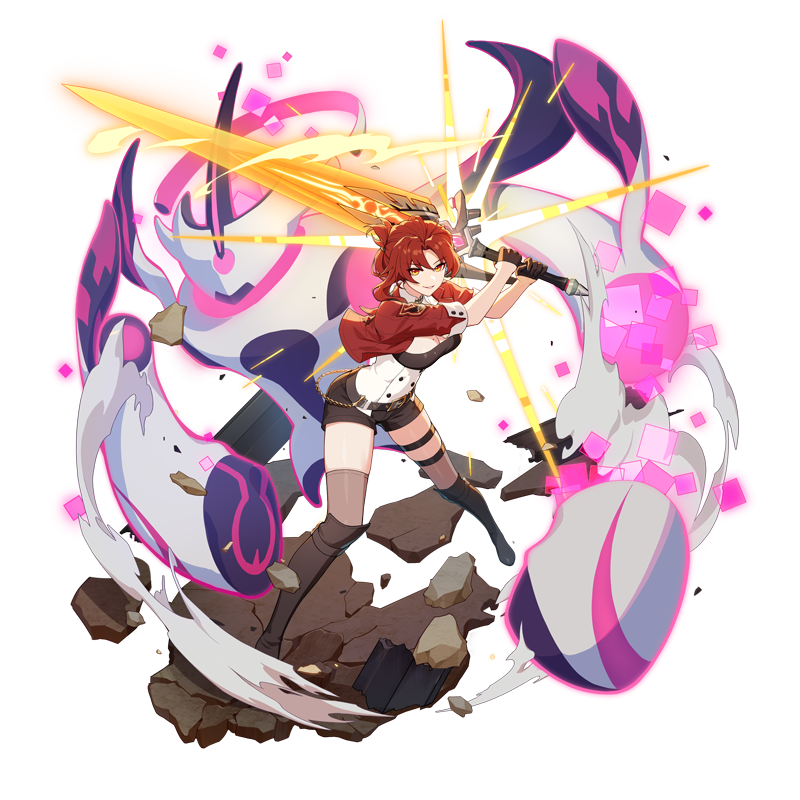 [Stormy Torch]
Boosts Max HP by 25%. When the host loses HP, enemies take 20% bonus Fire DMG from the host for 8s (effect does not stack- triggering it again resets the duration).

Analysis:
The user inflicts Fire Vulnerability every time she loses HP. The effect is triggered regardless of whether the loss in HP is self-inflicted or due to enemy attacks. Herrscher of Flamescion loses HP when casting Combo ATKs, so she can trigger this effect repeatedly. 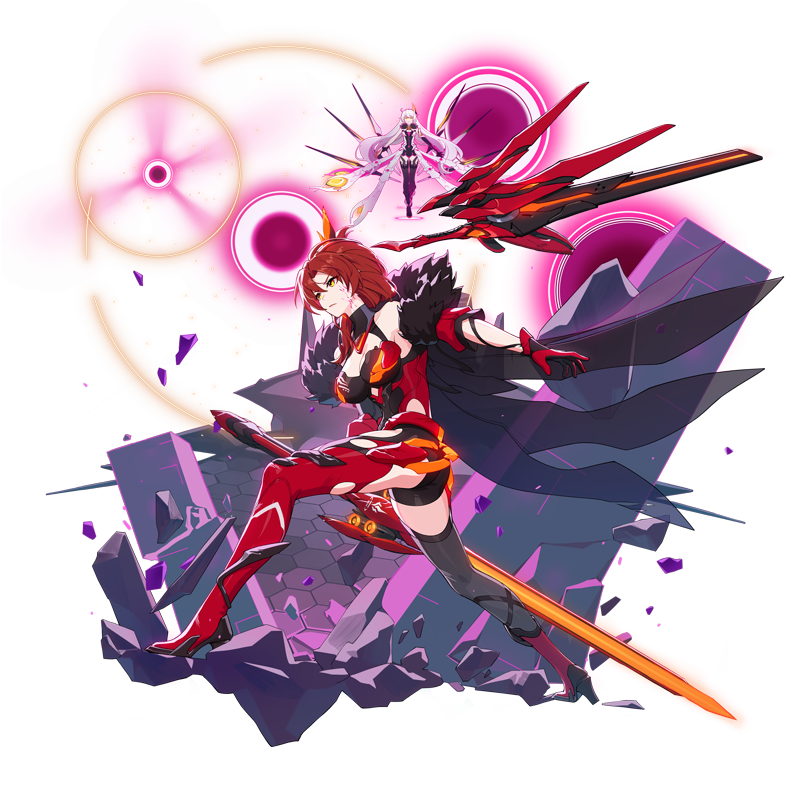 Analysis:
Unconditionally increases Total DMG. Grants as much as 40% bonus Fire DMG when the user's HP is below 60%. Herrscher of Flamescion's Combo ATK drains HP proportional to her current HP. At S-rank, she only needs to cast her Combo ATK once to fully activate this stigma's effects seconds later.
△ You can check how many stacks [Murata Himeko (B)] has granted on the buff bar.

★★Set Bonuses★★
2-pc Bonus: [Rebellious Fire]
In Herrscher form, each buff provided by the B-piece of this set provides another 15% bonus Fire DMG. The host takes 45% less Indirect DMG while she is below 60% HP.

Analysis:
Significantly increases Fire DMG in Herrscher form. Boosts survivability when health is critical. The Fire DMG bonus is determined by [Murata Himeko (B)] and is capped at 60%.

[Herrscher of Flamescion] can almost always maintain Herrscher form when attacking. If she Overheats, switch her out for a teammate and trigger buffs to help her get the most out this bonus when she re-enters the battle.

3-pc Bonus: [Everlasting Flames]
Boosts Total DMG by 20%. When the host loses HP, her next attack will deal 100% ATK of Fire DMG to surrounding enemies, which on hit boosts her Total DMG by 10% for 10s (triggering it again resets the duration. CD: 2s).

Analysis:
Unconditionally increases Total DMG. Herrscher of Flamescion's Combo ATK consumes her HP, enabling her to trigger the AoE Fire DMG effect repeatedly. It also further boosts her Total DMG. Its ability to be refreshed renders it effective throughout her attack cycle.

[Herrscher of Flamescion] can cast Combo ATKs to reduce her HP to below 60% and activate Herrscher form, triggering every DMG bonus of [Murata Himeko (T, M, B)]. Her DMG output will skyrocket.